Governor Kelly just released Phase 1.5 of the Ad Astra: A Plan to Reopen Kansas which will begin on May 18. Gatherings are still limited to 10 people. Social distancing should still be maintained and masks are strongly recommended.

Personal service businesses and fitness centers/gyms/health clubs WILL be allowed to open with some restrictions.

Some restrictions for fitness centers/gyms/health clubs are that group classes are not allowed and locker rooms must be closed except as necessary to use bathroom facilities.

Bars and nightclubs, theaters, museums, and other indoor leisure spaces will NOT be able to reopen during this phase. 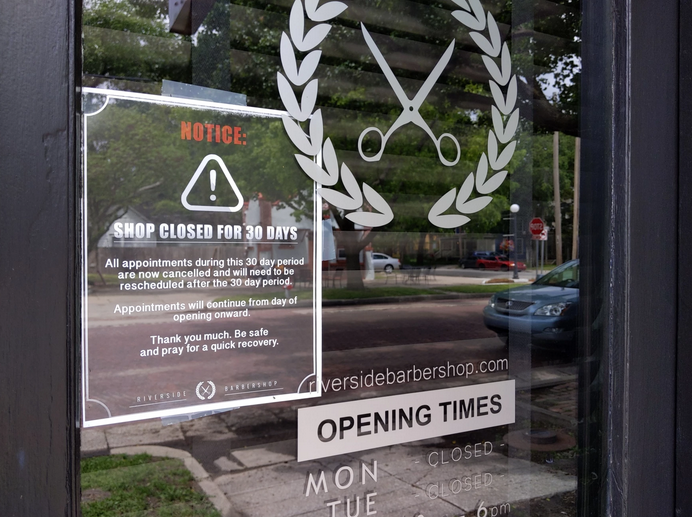 Kan. scales back next phase of reopening, but will allow haircuts, workouts

Gyms across Kansas will be able to open on Monday, May 18. Stephan Bisaha / Kansas News Service

Kansas officials have decided to delay moving into Phase 2 of the state's reopening plan, holding off on opening bars, concert venues and movie theaters.

Kansans won’t have to wait another week to go to the gym or the barber shop, but your neighborhood bar and local movie theater will stay closed until further notice.

"I said from the beginning that public safety must remain the top priority, which means that our reopening efforts must be driven by data, not dates," Kelly said in a statement.

Phase 2 was supposed to start Monday, allowing as many as 30 people to gather, as well as reopened bars (at 50% capacity), gyms, salons, tattoo parlors, movie theaters, community centers and sports tournaments.

But Kelly said circumstances can’t allow the full Phase 2 to start, so Kansas is moving into Phase 1.5 on Monday: Still no more than 10 people can gather at a time, but nail salons, barber shops, hair salons and tattoo parlors can open for pre-scheduled appointments. Also, gyms can reopen, but can’t hold in-person classes or make locker rooms available to customers.

In what will be welcome news to parents of high school seniors, graduation ceremonies are allowed, indoor and outdoor, as long as no more than 10 people are in one area at a time.

A barber shop in downtown Wichita was closed May 14, as it was not part of Gov. Laura Kelly's first wave of businesses that could reopen. It'll be allowed to resume haircuts on Monday, May 18. Stephan Bisaha

There is no specific targeted end date for Phase 1.5, though the newest executive order says it will “remain in force until rescinded” or until her emergency declaration expires.

The GOP-dominated State Finance Council extended that declaration through May 25 and has plans to change the emergency management law next week. Some Republican leaders, like state Senate President Susan Wagle, have been critical of Kelly’s phased-in plan. They say the Democratic governor is moving too slowly and unnecessarily damaging the economy in the process.

“We won’t allow one dictator to determine everything,” she said this week. “We will have a check and a balance of powers.”

The move also pushes the so-called third phase of reopening, which would lift pretty much all restrictions on businesses, aside from limiting gatherings to 90 or fewer people.

Kansas has more than 7,400 cases of COVID-19, with about 700 hospitalizations and, as of Thursday, 164 deaths. Most of the clusters in Kansas come in the same kinds of places they show up nationally — nursing homes, prisons and meatpacking plants.

About 13% of the 57,000 people who’ve been tested in Kansas have come back positive, according to Kansas Department of Health and Environment statistics. The World Health Organization recommends testing enough people until 10% or fewer are positive. In Kansas, only about 20 people per 1,000 are being tested.