MCCONNELL AIR FORCE BASE, Kansas — Nikki Heiman was excited to learn that the state was sending a job counselor to work with her son, Trenton, a high school student with Down syndrome.

But that excitement fizzled when Heiman learned the specialist could only meet with Trenton once a month — and only for 15 minutes. That’s all the time the counselor could squeeze into her schedule while handling a large caseload that forces her to shuttle between multiple counties.

“We were very disappointed,” Heiman said. “When you cover five counties, you spend so much of your workweek driving and not nearly enough providing services to people who need support.”

State agencies want Kansans with disabilities in the workforce. Even earning a modest wage can bring added purpose and pride to their lives, and stability. But landing and keeping a job, especially for people with cognitive challenges, can prove daunting.

To make that happen, counties across the state turn to the private Project Search program. The national program pairs disabled workers with employers and gives workers some of the special tools they need to keep things humming in an office or on a shop floor.

Genesis Coleman’s long legs made for an awkward fit in a chair made for someone half his size. But he read to the 1-year-old sitting next to him. The day’s book: “Teeth Are Not For Biting.”

Coleman hopes to earn a job working with children, possibly as a teacher’s aide. He has autism and he’s learning at McConnell how to deal with kids. That includes adapting to their heightened emotions, especially sadness.

“I ask them what’s wrong,” Coleman said. “I sometimes just let them just stay with me. And, you know, just tell them it’s alright sometimes.”

Project Search works with 13 Kansas job sites, including hospitals, universities and hotels. Instructors try to keep a light touch on supporting the interns on the job.

“We have high expectations because we don’t want them to fail when they get their full-time, paying job,” said Vicki Rierson, a Project Search instructor for Derby Public Schools.

Besides the work experience, interns spend part of their day in class. The lessons range from financial literacy to self-care — topics meant to help students in their life during and after work.

After eight years in Kansas, Project Search says 74% of its interns land jobs. Only about 46% of working age Kansans with disabilities are employed. For those with cognitive disabilities, it’s 35%.

Project Search helps about 100 interns a year in Kansas. The Kansas Department for Children and Families estimates that more than 16,000 students 16 and older have a disability.

Kansas offers job counseling for students and graduates with disabilities, but the state doesn’t have enough counselors for everyone.

Kansas struggles to hire the counselors it needs because they can make more in other states. Counselors in Nebraska make $20,000 more than those in Kansas.

But the tight Kansas labor market could also make it easier to convince employers to hire more workers with disabilities, their advocates say. They say that with workers scarce, businesses can’t afford to ignore any job applications.

“Any employer you talk to will tell you how hard it is to hire good help these days,” said Rocky Nichols, head of the Disability Rights Center of Kansas. “Well, guess what? There are tons and tons of people with disabilities who have talents, who have abilities and skills, who are being unutilized in our Kansas economy.”

Even after getting hired, Kansans with disabilities still need ongoing support, So do their employers. Advocates say businesses need training in how to accommodate someone with a disability.

With just minimal support, like having an advocate check in at work every few months, 70% of workers with cognitive disabilities stay successful, said Craig Knutson, a policy analyst with the Kansas Council on Developmental Disabilities. He said that without the support, most lose their job after five years.

Employers may need lessons on how to communicate with someone who doesn’t speak. A worker with Down syndrome may need more supervision and direct instructions to stay on task.

And as a task changes — like a filing system going from physical to digital — more training has to happen.

Project Search approached Jennifer Jull-Sullivan about taking on an intern at her veterinary practice a few years ago. She previously had one employee with a disability work at Blair Doon Veterinary Hospital for about a decade. But the employee’s condition eventually worsened until she could no longer work. Jull-Sullivan eventually did take on the intern and eventually hired him as a kennel assistant. That’s a choice she likely wouldn’t have made without support before and after the internship.

“I really did feel like I’d had my hand held all the way through,” Jull-Sullivan said. “It worked very nicely.”

Stephan Bisaha reports on education and young adult life for KMUW and the Kansas News Service. You can follow him on Twitter @stevebisaha. 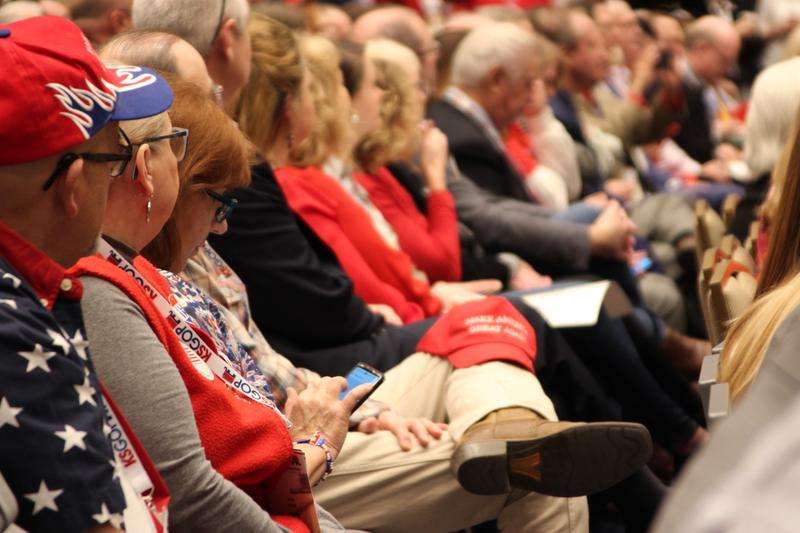 OLATHE, Kansas — Candidates determined to keep Kansas’ U.S. Senate seats in Republican hands quarreled Saturday over immigration, health care and federal spending, but no topic was more debated than who is the most friendly and in step with President Donald Trump.

In front of a standing-room only crowd at the 2020 Kansas Republican Party convention, U.S. Rep. Roger Marshall, former Secretary of State Kris Kobach and state Senate President Susan Wagle argued over which of them was the most conservative and would be Trump’s most loyal foot soldier in the U.S. Senate.

Claiming that he’s voted with the president 98% of the time during his two terms in the U.S. House, Marshall pledged to “keep standing beside this president to stop the left’s socialist agenda.”

But Kobach argued that since most of the legislation considered by Congress isn’t controversial, virtually all Republicans — even many Democrats — vote “with the president” most of the time.

“So, that’s not an answer to the question,” he said.

Kobach won the 2018 Republican primary for Kansas governor with Trump’s backing, but lost the general election to Democrat Laura Kelly. For many Republicans, that’s a cause for concern heading into what is likely to be the state’s most competitive race for a U.S. Senate seat in decades. Longtime U.S. Sen. Pat Roberts is retiring.

Republicans would be risking a seat they’ve controlled since the Great Depression by nominating Kobach, Wagle said.

“Oh, there’s no question we’d lose,” she said in an interview after the debate.

Kobach pointed to his two winning campaigns for Kansas secretary of state: “I can say that in this presidential election year I certainly will win again.”

Marshall, whose 1st Congressional District covers roughly two-thirds of the state, is the runaway leader in fundraising on the Republican side: $1.9 million on hand as of Sept. 30, the end of the last reporting period. He hasn’t made his year-end fundraising report public. Kobach finished the year with $190,387 in his campaign account, and after loaning her campaign $275,000, Wagle ended the year with $522,683.

Marshall and Kobach have personal relationships with Trump, and both claimed to have met with him recently. Wagle can’t say that, so she touted her record as a leader in both the Kansas House and Senate.

“I’m the proven conservative in the race,” she said. “I get things done. People follow me.”

Immigration came up more than once during the debate. Kobach, who’s helped toughen immigration laws across the country, said he’d be Trump’s “point man” in an effort to do the same in Congress. Marshall said he has consistently opposed compromise proposals that would grant “amnesty” to people who entered the country illegally or overstayed their work visas.

The national debt, which the Congressional Budget Office says will reach $1 trillion in 2020, also made its way into the conversation. Kobach said he would hold the line on spending, and criticized Marshall for voting against a measure to reduce spending, adding Republicans talk the talk but “we don’t always walk the walk.”

Kobach also criticized Marshall for his May 2019 op-ed in the Kansas City Star that called for a stop to Trump’s tariff war due to the effects on Kansas farmers.

“It’s critical that the president have people who have his back,” Kobach said. “He cannot have Midwestern congressmen shooting arrows at his back when he’s trying to hold firm with China.”

That drew another heated response from Marshall: “That’s exactly what the national press does … they grab one little excerpt and spin it into a great big lie.”

Marshall, a physician, said that one of his top priorities is replacing the Affordable Care Act. He said he has worked with Trump for months to “outline” a policy that would reduce health care costs by increasing competition, but didn’t give any specifics during the debate or afterward to reporters.

Taking a shot at Kobach’s perceived weakness as a general election candidate, Marshall said that Kansas Republicans can’t risk losing to a Democrat who would “vote for Medicare For All,” a policy that U.S. Sens. Bernie Sanders and Elizabeth Warren are advocating for during their campaigns for the White House.

While vowing to stand with the president, Marshall said he would attempt to bridge the partisan divide by continuing to build personal relationships with Democrats at a weekly prayer meetings attended by members of both parties.

Wagle said she has never compromised her conservative principles but is the kind of leader who “brings other people under the tent.”

While it would be nice to return to the bipartisan way that Washington, D.C., used to work, Kobach said, he doesn't believe that's possible.

“We’re in a different era in politics right now,” he said. “We need a fighter.”

GOP candidate Dave Lindstrom was not able to attend the debate due to emergency surgery on Friday, but had a member of his campaign provide an opening statement.

Jim McLean is the senior correspondent for the Kansas News Service is a collaboration of KCUR, Kansas Public Radio, KMUW and High Plains Public Radio focused on health, the social determinants of health and their connection to public policy. You can reach him on Twitter @jmcleanks or email [email protected]