Photo of a suspect in the theft of a UTV and ATM cash from Bill Snyder Family Stadium.

MANHATTAN — The Kansas State University Police Department is investigating thefts of a utility terrain vehicle and money from an ATM at Bill Snyder Family Stadium.

The incidents occurred during the early morning hours between Dec. 26 and Dec. 29, 2019, according to a media release from the university.

The second UTV was returned to the stadium by the suspect later that morning.The money taken from the ATM — in $10 and $20 denominations — may smell of cleaning solution and have a yellow tint. The dried bills may be brittle but wrinkled.

K-State Police released photos of two suspects, vehicles in and around the area at the time of the incident, cash left at the scene, and a stock photo of the stolen UTV.

Money taken from the ATM at the football stadium may smell of cleaning solution and have a yellow tint.

Police request that anyone with information about these cases call 785-532-6412 or email [email protected] Police are especially interested in home security video and witness accounts from the neighborhood surrounding the stadium that may have recorded or witnessed any related activity. 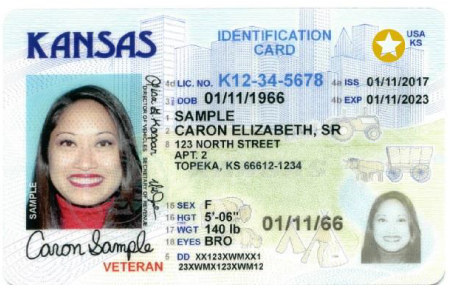 REAL ID: Time for air travelers to get real

Beginning October 2020, all U.S. residents will need a compliant license/ID or an acceptable form of ID to board a domestic flight, access a Federal facility, or enter a nuclear power plant. The Transportation Security Administration (TSA) considers a current passport or military ID acceptable identification for boarding an aircraft.“The requirement for REAL ID to fly will be here before we know it,” says Shawn Steward, manager of public and government affairs for AAA Kansas. “To avoid being caught off-guard, now is the time for Kansans to decide whether they’ll upgrade to a REAL ID-compliant license or whether they’ll use a passport instead.” Since 2007, the Kansas Department of Revenue’s Division of Vehicles has been preparing for implementation of Real ID. In 2017, the Division began issuing driver’s licenses and identification cards with the Real ID symbol at the top of license or identification cards.If you provided the needed documentation since 2007, you may already be ready for Real ID. To see if you are already in the system, simply go to https://www.kdor.ks.gov/Apps/DLStatus/login.aspx to get a driver’s license status check.

Federal regulations require that the Division of Vehicles must verify the following documents for a customer before issuing a REAL ID-compliant product:

While AAA Kansas retail branch offices are not REAL ID centers, AAA Travel Agents are on hand to discuss any questions that AAA members or the general public may have about the program. AAA Kansas retail travel offices have REAL ID information cards available for travelers. Additionally, travelers can consult the Kansas Department of Revenue’s REAL ID web pagefor additional information.AAA provides automotive, travel, and insurance services to 60 million members nationwide and nearly 349,000 members in Kansas. AAA advocates for the safety and mobility of its members and has been committed to outstanding road service for more than 100 years. AAA is a non-stock, non-profit corporation working on behalf of motorists, who can now map a route, find local gas prices, discover discounts, book a hotel, and track their roadside assistance service with the AAA Mobile app (AAA.com/mobile) for iPhone, iPad and Android.  For more information, visit www.AAA.com.