Trump visited Ypsilanti, outside Detroit, to tour a Ford Motor Co. factory that had been repurposed to manufacture ventilators, the medical breathing machines governors begged for during the height of the COVID-19 pandemic.

But his visit came amid a long-running feud with the state’s Democratic governor and a day after the president threatened to withhold federal funds over the state’s expanded vote-by-mail effort. And, again, the president did not publicly wear a face covering despite a warning from the state’s top law enforcement officer that a refusal to do so might lead to a ban on his return.

All of the Ford executives giving Trump the tour were wearings masks, the president standing alone without one. At one point, he did take a White House-branded mask from his pocket and tell reporters he had worn it elsewhere on the tour, out of public view.

“I did not want to give the press the pleasure of seeing it,” Trump said.

For a moment, he also teasingly held up a clear shield in front of his face. A statement from Ford said that Bill Ford, the company’s executive chairman, “encouraged President Trump to wear a mask when he arrived” and said the president wore it during “a private viewing of three Ford GTs from over the years” before removing it.

The United Auto Workers union noted in a statement that “some in his entourage’” declined face masks and said “it is vitally important that our members continue to follow the protocols that have been put in place to safeguard them, their families and their communities.”

The UAW also noted Trump’s statement that he had just been tested for the virus and said it wanted to make sure he understood the wider “need for an economical instant test that can be administered daily to further protect our members -- and all Americans.”

Michigan Gov. Gretchen Whitmer said Trump’s decision “wasn’t surprising but it was disappointing.” Speaking to MSNBC, she added that anyone with a public platform “has a responsiblity to make sure that they model precisely what we’re asking everyone else to do.”

Michigan Attorney General Dana Nessel said mask wearing isn’t just Ford’s policy — it’s also the law in a state that’s among those hardest hit by the virus. Nessel said that if Trump refused to wear a mask Thursday “he’s going to be asked not to return to any enclosed facilities inside our state” and “we’re going to have to take action” against any company that allows it in the future.

Trump has refused to wear a face mask in public, telling aides he believes it makes him look weak, though it is a practice that federal health authorities say all Americans should adopt to help slow the spread of the virus.

Ford said everyone in its factories must wear personal protective equipment, including masks, and that its policy had been communicated to the White House. At least two people who work in the White House and had been physically close to Trump recently tested positive for the virus.

The Republican president and Whitmer have clashed during the coronavirus outbreak over her criticism of the federal response to the state’s needs for medical equipment, like ventilators, and personal protective gear, such as gloves, masks and gowns. Trump on Thursday criticized Democratic governors, suggesting they were proceeding too slowly in reopening their states’ economies.

“You have a lot of, unfortunately, in this case Democrat governors (who) think it’s good politics to keep it closed,” Trump said. “I think they’re being forced to open, frankly, the people want to get out. You’ll break the country if you don’t.”

Trump narrowly won Michigan in 2016. He insists mail-in voting is ripe for fraud, although there is scant evidence of wrongdoing.

“We don’t want them to do mail in ballots because it’s going to lead to total election fraud,” Trump said Thursday. But then he allowed for some exceptions, including for himself.

“Now, if somebody has to mail it in because they’re sick, or by the way because they live in the White House and they have to vote in Florida and they won’t be in Florida. But there’s a reason for it, that’s OK.”

Trying to signal to the nation that life is returning to normal, the president has begun traveling again, with all of his initial trips to states that will be hotly contested in this November’s election. Campaign advisers have grown increasingly worried about Michigan, believing that the president’s attacks on Whitmer have not worked and that the toll the virus has taken in the Detroit area, particularly among African Americans, will prove costly politically.

Trump, at a roundtable with African American supporters in front of a sign with his slogan for reopening the economy, “Transition to Greatness,” noted low minority unemployment numbers before the pandemic and also pointed to his administration’s work on criminal justice reform.

The president’s advisers have become convinced that of the three Rust Belt states that Trump took from Democrats in 2016, Michigan would be much more difficult to win again than Pennsylvania and, especially, Wisconsin.

In the early days of the crisis, Whitmer and other governors and medical workers clamored for ventilators, fearing a shortage of the machines would prove deadly as the virus made breathing difficult for the scores of afflicted patients who were being brought to hospitals.

But the U.S. now has a surplus of the breathing machines, leading Trump to begin describing the nation as the “king of ventilators.” 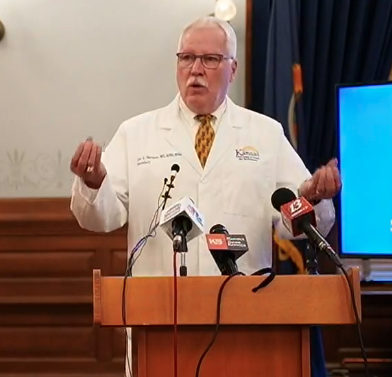 SALT LAKE CITY (AP) — Health investigator Mackenzie Bray smiles and chuckles as she chats by phone with a retired Utah man who just tested positive for the coronavirus.

She’s trying to keep the mood light because she needs to find out where he’s been and who he’s been around for the past seven days. She gently peppers him with questions, including where he and his wife stopped to buy flowers on a visit to a cemetery. She encourages him to go through his bank statement to see if it reminds him of any store visits he made.

Midway through the conversation, a possible break: His wife lets slip that they had family over for Mother’s Day, including a grandchild who couldn’t stop slobbering.

“Was there like a shared food platter or something like that?” Bray asks. “There was, OK, yep ... sharing food or sharing drinks, even just being on the same table, it can spread that way.’”

Suddenly, with a shared punch bowl, the web has widened, and Bray has dozens more people to track down.

She is among an army of health professionals around the world filling one of the most important roles in the effort to guard against a resurgence of the coronavirus. The practice of so-called contact tracing requires a hybrid job of interrogator, therapist and nurse as they try coax nervous people to be honest.

The goal: To create a road map of everywhere infected people have been and who they’ve been around.

While other countries have devised national approaches, a patchwork of efforts has emerged in the U.S. where states are left to create their own program.

Bray normally does this type of work to track contacts for people with sexually transmitted diseases. She is now one of 130 people at the Salt Lake County health department assigned to track coronavirus cases in the Salt Lake City area. The investigators, many of them nurses, each juggle 30 to 40 cases, and try to reach everyone the original person was within 6 feet  of for 10 minutes or more. They stay in touch with some people throughout the 14-day incubation period, and calls can take 30 minutes or more as they meticulously go through a list of questions.

Some estimate as many as 300,000 contact tracers would be needed in the U.S. to adequately curtail the spread. While some states like Utah have reported having enough contact tracers, others are hundreds or even thousands of people short.

The contact tracers often find themselves in a tangled web of half-truths and facts that don’t match up. Language and cultural barriers arise that require interpreters and taxing conversations that leave the investigators wondering if the person understands what they’re trying to do.

They land on occasion into complicated family dynamics where people are reluctant to tell the truth.

Health investigator Maria DiCaro found out days into a case that a father was sleeping in his car because he and his wife were separating. The man had stopped returning DiCaro’s calls, and that key information came from his child.

“I get people that lie all time,” DiCaro said. “I try to get as much information from the beginning but it’s just not always the case. And time is one of those things you can’t take back when you are trying to prevent and you know do these contact tracing investigations.”

Each call is an exercise in good cop, bad cop. She needs people to cooperate, but no one is legally required to answer the questions. Usually kindness works better than strong words.

Some people lie because they’re scared, or they forget an outing. Construction workers, housekeepers and others without paid sick time may gloss over symptoms so they can get back to work. Some immigrants without documentation brush off testing because they fear it could lead to deportation.

“People sometimes think contact tracing is black and white but there is a lot of gray that goes into it,” said Bray, who often thinks about her parents and 97-year-old grandmother as she works to help stop the spread of the virus. “Our worst fear is that we push too hard and we lose someone. It’s not just their health on the line, it’s the people around them.”

No matter the tension, Bray and DiCaro give frequent reminders of why it all matters: “Thank you for what you’re doing. You’re helping the community,” DiCaro says during one call.

She knows that on the other end of the line, the first call from a tracer can be jarring. Sometimes, DiCaro and Bray have to break the news that someone was exposed or tested positive.

“It’s normal to talk to like your doctor, but you don’t ever expect the health department to call you and be like, ‘You were exposed to a serious disease,’” said Anissa Archuleta.

The 23-year-old got a call from DiCaro after she, her sister and her mother took a rare break from hunkering down to help organize a drive-by birthday party for a young cousin. They dropped off a present, then caved and accepted an impromptu invitation to go inside to grab some food.

What they didn’t know: the father of the birthday boy had the coronavirus, and unknowingly exposed more than a dozen people at the gathering.

After that first call, DiCaro checked in every day for two weeks. The fear slowly faded after their tests came back negative and they began building a rapport with DiCaro. She asked about their symptoms and how they were feeling each day and learned about how Archuleta’s mother lost her voice to fibromyalgia. Archuleta would pass along messages her mother whispered in her ear.

And after a while, Archuleta began asking DiCaro about her life and how she was holding up.

About a week in to their calls, on the daily check-in, Archuleta thanked DiCaro for caring about them and checking in every day. Tears welled up in DiCaro’s eyes.

“Ah thanks,” she said as she grabbed a Kleenex to wipe her eyes.

After she hung up, she leaned back in her chair and closed her eyes for a few seconds.

“When you do this like 10-12 hours a day ... It’s nice to get those positive reactions from people that are very grateful who do see the purpose of what we are doing,” said DiCaro. “It’s nice to be appreciated.”