A 6-foot-3, 180-pound point guard, Williams joins the Wildcats after a two-year stint at NE Oklahoma A&M College in Miami, Oklahoma, where he led the NJCAA (National Junior College Athletic Association) in assists in 2019-20 for the Golden Norse, while the 6-foot-9, 205-pound forward Lewis arrives from AZ Compass Prep School in Chandler, Arizona where the Chicago native averaged a double-double this past season.

“We were excited about the initial group of signees in the Fall,” said Weber. “We were going to have a strong need to replace perimeter guys and that was our main concern with this signing class. If you look at the players we signed in the Fall (Davion Bradford, Luke Kasubke, Selton Miguel and Nijel Pack), we were able to fill every position with some versatility. I think the big key was the fact that we were able to get a true big man (Bradford). A 7-footer who already has a pretty good body, both strength and weight-wise.

“Our main focus with the second part of our signing class was to get an experienced point guard (Williams) to go along with our young players (DaJuan Gordon, Pack, Kasubke and Miguel) and then we wanted to bring in another athletic big guy (Lewis) to complement Davion (Bradford) and the guys we have returning (Levi Stockard III, Kaosi Ezeagu, Antonio Gordon and Montavious Murphy).”

The current class is still rated among the Top 25 by several recruiting services, including No. 18 by Rivals.com, No. 23 by 247Sports.com and No. 24 by ESPN. Historically speaking, it is the highest-rated recruiting class under Weber and the highest collective class by K-State since recruiting rankings have been kept. Four of the five prep players are rated among the Top 200 players nationally, including four members of the Rivals150, while Williams ranks No. 54 on the list of the top junior college players in the country by JucoRecruiting.com.

The six-man class is the largest class in the Weber era and now includes players from two countries (Angola and Canada) and three states (Florida, Indiana and Missouri) at all five positions.

Much like the Fall Signing Class, which posted a collective 94-22 (.810) record in their final prep seasons in 2019-20, Lewis and Williams will also arrive at K-State with a winning mentality after having helped their teams to a combined 49-13 (.790) record this past season. Williams helped NE Oklahoma A&M post its best two-year period (52-14; .788) in nearly 30 seasons, including a trip to the NJCAA National Tournament in 2018-19 and near repeat this past season after falling in the Region II Championship game. Lewis’ AZ Compass Prep team tallied a 24-6 mark in 2019-20 and advanced to the semifinals of The Grind Session World Championship, a postseason showcase for independent teams that play outside traditional state associations. A fellow semifinalist at the World Championship was West Oaks Academy in Orlando, Florida led by fellow signee Selton Miguel.

“I think it’s always important to bring in players from winning programs,” said Weber. “Anytime you can get a player who has come up through a program that’s won, I think they understand the importance of teamwork and what the main goal of basketball is which is to win.

“In Rudi’s case, when I asked him what do you want me to say about you as a player and his response was that ‘I win’ and ‘I want to win’. He led his team to Hutch (NJCAA National Tournament) as a freshman, won their conference in back-to-back years and lost in the finals (Region II) to return to Hutch this year. Nijel’s (Pack) team (Lawrence Central) was one of the best teams in Indiana, Davion’s team (Mehlville) lost to Luke’s team (Chaminade) to go to the Final Four and Selton’s team (West Oaks) was one of better teams in the country, winning at Oak Hill (Academy), which hadn’t lost in years at home, then beating Prolific (Prep), which was considered one of the top prep schools in the country, and they also won their conference title.

The first member of the Spring signing class to commit (March 19), Lewis was a key piece for head coach Ed Gipson’s AZ Compass Prep squad that could include as many as seven Division I signees in 2020. He averaged a double-double of 13.2 points, 10.1 rebounds, 1.0 steals and 1.0 blocks per game this past season. He scored 18 points on 8-of-11 shooting in the 81-70 quarterfinal win over Minnesota Prep at The Grind Session World Championship on March 11. He also had a near double-double (12 points and 8 rebounds) in a win over St. Louis Christian in the first round on March 10.

A native of Chicago, Lewis played for the acclaimed Mac Irvin Fire AAU program, where he led the squad to a 10-3 record in the 2019 Nike EYBL. He averaged 9.9 points on 64.1 percent shooting (50-of-78) with 5.4 rebounds in 18.2 minutes per game. He scored a season-high 22 points on 9-of-12 shooting against UPLAY Canada on May 11, 2019. He also played at Kenwood Academy and has a longtime friendship with rising sophomore DaJuan Gordon.

An outstanding student, Lewis also earned offers from Brown, Columbia and Yale in the Ivy League.

A native of Hamilton, Ontario, Williams developed into one of the top junior college point guards in the country at NE Oklahoma A&M, where he set school records for both single season (267) and career (492) assists. He earned Second Team All-America honors from the NJCAA as a sophomore, while he was the NJCAA Region II Player of the Year as well as a first team all-conference and all-region selection. 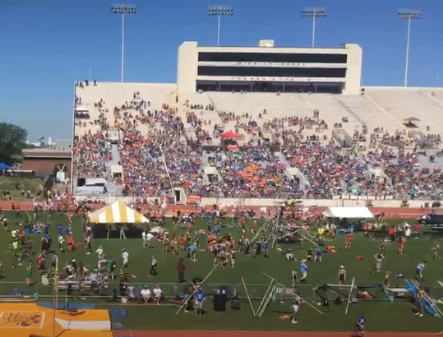 WICHITA, Kan. (AP) — Wichita State University is seeking to tear down its 74-year-old Cessna Stadium and replace it with a new smaller, multi-purpose stadium.

The university has asked the Kansas Board of Regents to allow it to raze the 30,000-seat stadium. Cessna is currently home to the Wichita State track and field team and is also home the nation’s largest high school track and field meet.

University officials say the condition of the amenities in the stadium have deteriorated drastically since the school’s football program was discontinued in 1986.

The proposal leaves in limbo what would happen to the Kansas high school state track and field meet, which has hosted around 3,500 athletes for all six championship meets for boys and girls for the last four decades.

The proposed smaller stadium would host not only Wichita State’s track and field events, but could also attract high school and club events for soccer, lacrosse and track and field, university officials said.

WSU estimates it will cost $1.4 million to tear down the building. That money would be raised from private funds and restricted fee funds, officials said.