:KANSAS CITY, Mo. - The Big 12 Conference has announced the immediate suspension of all Conference championships until April 15, resulting in the cancellation of the Phillips 66 Big 12 Men’s and Women’s Basketball Championships in Kansas City, along with its upcoming gymnastics and equestrian championships.  Conducting future Big 12 championships this season will be evaluated and determined by April 15.

“After consultation with our Board of Directors it was decided that cancelling these championships was in the best interest of the health and safety of our student-athletes,” said Commissioner Bob Bowlsby.

Details will be forthcoming on full refunds of ticket purchases for these championships. 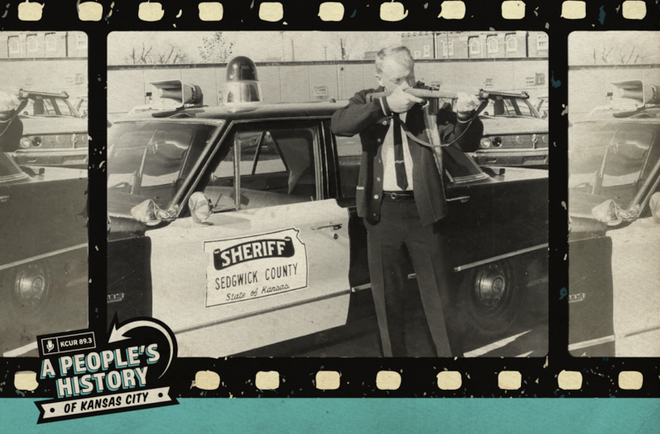 Listen to this episode of A People's History Of Kansas City, a new podcast from KCUR 89.3. For more stories like this one, subscribe on Apple Podcasts, Spotify, Google Play and Stitcher.

Kansas’s 36th attorney general was infamous for popping out of trunks, inciting gunfights on buses, and going toe-to-toe with other lawmen and politicians. It was this unabashed, brash approach to law enforcement that earned Vern Miller the nickname "Lawman of the State."

“He was just kind of a cowboy who did things his way,” says Jim McLean, senior correspondent with KCUR’s Kansas News Service. “The narrative of the state of Kansas where you had these marshalls, sheriffs, of these Wild West communities, that would take matters in hand and clean up the town, right? Well, there's a certain amount of that to Vern Miller.”

But Vern Miller was not a Wild West sheriff. Miller wielded much of his power between the 1960s and the 70s, a socially and politically tumultuous time in Kansas and across the country.

Growing up in a hardscrabble community outside of Wichita, Miller worked at a dairy farm and got into a lot of fights as a kid.

“There was a lot of scrappin’ going on,” says Miller, now 91 and living in Phoenix. “Everybody scrapped at that age.”

After serving in Korea in the 1950s, Miller returned to become a road patrolman in the sheriff’s office. And he quickly became known for physical altercations.

One legend says that, as a traffic officer following a high-speed chase, Miller whipped a man in the face and dragged him through the car window.

As another story goes, Miller fought his boss — the sheriff — in the sheriff’s own home, ultimately costing him his job. In 1964, in a twist of irony, Miller won the race for sheriff of Sedgwick County, the state’s most populous county at the time.

Not shy about his new role, Miller traversed the county, busting folks for any and every possible infraction. He even went so far as to tell churches to suspend their cash bingo games.

“A lot of old ladies in town didn’t like that,” Miller remembers. “They like to play bingo.”

With a long history as a prohibition state, Kansas still had restrictive drinking laws at the time, which prevented the sale of liquor by the drink.

“Kansas for so long hadn’t had any laws enforced, along those areas,” Miller says. “I wanted them to know what the law was, and tell them they need to obey the law. And if they didn’t… then there’d be trouble about it.”

Besides bingo and drinking laws, Miller made headlines in the summer of 1968 for inciting a deadly gunfight on a bus in Wichita in order to nab two men suspected of murder in Missouri. And in 1967, he veered dangerously close to starting a mini-civil war in Kansas after making disparaging comments about officials in Leavenworth County. Miller was subpoenaed by the Leavenworth County prosecutor, who threatened to arrest him. In turn, Miller threatened to kill the men who came to arrest him. What resulted from that incident was the passing of Miller’s Law, which makes it illegal to resist an unlawful arrest.

Despite these controversies, or maybe because of them, Miller became a popular force during the social and political upheaval that dominated the 1960s, so much so that Democratic Gov. Bob Docking asked him to run as attorney general. It was Docking’s hope that Miller would turn out Democratic voters in populous Sedgwick County. Miller felt reluctant; a Democrat had not held the attorney general position in 80 years, and Miller had planned on going into private practice (he earned his law degree in Oklahoma by flying back-and-forth in a private plane).

“And I told ‘em, ‘I don’t know nothing about being attorney general,’” Miller recalls.

In 1970, he was elected attorney general of Kansas.

Traditionally, the attorney general is primarily concerned with managerial duties: ensuring that state laws are enforced through memos and deciding where to deploy investigative and prosecutorial resources. John Frieden, who was on his staff at the time, says Miller saw the job differently.

“The attorney general is the chief law enforcement officer in Kansas,” Frieden remembers Miller communicating. “And he was hands on.”

One of Miller’s campaign promises was to “land in the middle of the drug-ridden hippie commune at Lawrence with both feet."

Within his first few weeks in office, the newly-minted attorney general directed and personally executed raids at the University of Kansas in Lawrence.

Susan Hudgens, who now lives outside of Topeka, says she witnessed one of those raids when she cruised into Lawrence with her friends. They found themselves hanging out near one of the KU dorms when cars pulled up and Miller appeared.

“Sure enough, the trunk popped open and out comes this guy in a suit and a hat,” Hudgens says.

That was Miller with his signature move, and Hudgens remembered watching as he and his men converged on the dorm buildings.

“He acted more like the FBI guys chasing Bonnie and Clyde than a bureaucrat passing papers and writing reports, and that impression stuck,” Hudgens says.

Miller was especially keen on enforcing alcohol laws in Kansas. In the early 1970s, he made sure Greyhound and Trailways buses traveling through Kansas followed the state’s restrictions on selling liquor by the drink. And when Miller found out that Amtrak still sold liquor on trains passing through the state, Miller had a plan to enforce the law.

Here’s how he did it: An Amtrak train made a late-night stop in Newton, Kansas, Miller showed up, unannounced, and proceeded to storm the train with officers by his side. Together, they confiscated all of the alcohol on the train, threw the conductor in jail, and left the passengers stranded in Newton all night.

“So the train sat all night there in Newton, Kansas,” Miller says. “A little podunk town.”

The incident resulted in a lawsuit that Amtrak took all the way to the Supreme Court, which ruled that the Constitution gives states the power to regulate alcohol consumption.

Miller says lawyers for airline companies began asking how he would enforce the state’s alcohol laws on airplanes.

“And I said, ‘Well, fellas, I believe we’re under the same law and I believe you’re subject to it, so if you stop I won’t be raiding the plane,’” Miller recalls. “So they said, ‘Oh, it'll stop.’ So they stopped serving liquor over Kansas for a couple years.”

Although these actions drew ridicule from late-night talk show hosts, Miller’s popularity skyrocketed. In 1972, he won every county in Kansas during his reelection campaign. Two years later, as Kansas Gov. Bob Docking decided to run for U.S. Senate, Democrats looked to Miller to run for Governor.

“There was a poll run right before he ran for governor. In that particular poll, he had the support of 85% of people of Kansas.” says Democratic campaigner John Frieden. “I have never seen a poll that favorable to a candidate.”

Regardless of the polls, Miller lost the governor’s seat to Republican Robert Bennett by only 3,677 votes. And one place that came out against him was Douglas County, home of the “drug-ridden hippie commune” of Lawrence.

After leaving public office, Miller continued to practice law in Wichita, and eventually retired to Phoenix. Miller also received an honor from the Kansas Bar Association.

Meanwhile, Kansans voted in a referendum in 1986 to change the state constitution to allow liquor sales by the drink, paving the way for bars and restaurants to openly serve alcohol in the state.

Looking back at Miller’s legacy as a law enforcement officer, his aggression on the job would be scrutinized through a new lens: one that, in recent years, has become critical of police brutality and violence against civilians. That Miller largely sailed through his political career without much public criticism is perhaps more a reflection of the times than the man himself.

Still, John Frieden says it was Vern Miller’s pugnacious ways that led to his most lasting contribution to the state.

“And I think anybody who looks back at those times, the laws that he enforced that people were kind of uncomfortable with, they changed the laws,” Frieden says. “The laws were changed because of that and we came back into the 20th century.”

Celisa Calacal is a freelance contributor at KCUR 89.3. Matthew Long-Middleton is part of the America Amplified team based at KCUR 89.3. Connect with him at @mlmindustries.