Hubert and Youngblood, who were also named to the first team by the league’s coaches, were joined by punter Devin Anctil and offensive lineman Josh Rivas on the AP’s second team. Anctil was also a second-team pick by the coaches, while Rivas earned the first all-conference honor of his career.

Hubert, a product of Topeka, Kansas, enters the bowl season ranked second in the Big 12 in sacks with 7.0 and eighth in tackles for loss with 12.5 thanks in part to two-sack games against Oklahoma State and Texas Tech. Hubert has 11.5 career sacks, tied for the second most by a Wildcat prior to the end of his sophomore season (Darren Howard, 13.5, 1996-97).

A true freshman from Tampa, Florida, Youngblood was one of the most explosive players in the Big 12 down the stretch run of the season as he returned a kickoff for a touchdown in three of the final four games. The 2019 Big 12 Special Teams Player of the Year by the league’s coaches, Youngblood ranks third in school history in season-season kickoff return touchdowns and fourth in a career, while he ranks third in Big 12 history for a season and seventh in a career. Youngblood has also caught nine passes for 73 yards this season in addition to rushing 11 times for 55 yards and a touchdown.

Rivas is the fifth of the six regular offensive line contributors to earn All-Big 12 honors this year as he has helped K-State rank fourth in the Big 12 with 189.0 rushing yards to per game. He has also helped pave the way for 28 rushing touchdowns, the third most in the league.

Kansas State takes on Navy in the 61st Annual AutoZone Liberty Bowl on Tuesday, December 31, inside Liberty Bowl Memorial Stadium in Memphis, Tennessee. The game, which kicks off at 2:45 p.m. (CT), will be shown nationally on ESPN.

Join the Wildcats in Memphis by purchasing seats in K-State’s sections, parking and pre-game party tickets by visiting www.kstatesports.com/bowlgame or calling 1-800-221-CATS. Sideline bench seating is available for just $85 per ticket, and a limited number are still available at midfield. Parking passes are available for just $20 each. Fans are also invited to purchase tickets to the bowl’s pre-game party, which includes an all you can eat buffet, next to the stadium for just $40. 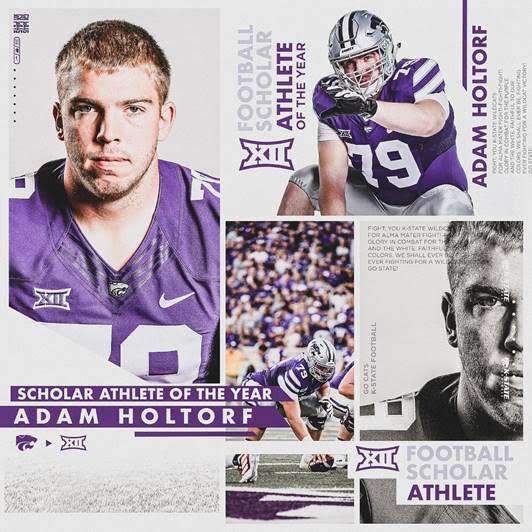 MANHATTAN, Kan. – Kansas State center Adam Holtorf earned his second academic honor in as many days by being named the 2019 Big 12 Football Scholar-Athlete of the Year, the conference office announced on Tuesday.

Holtorf, who was named a First Team Academic All-American on Monday, is the first Wildcat to earn the distinction – which is in its eighth year of existence – since Tyler Lockett was honored following the 2014 season.

A product of Seward, Nebraska, Holtorf, holds a 3.916 GPA in agribusiness in his final season at K-State. He is a 2019 National Football Foundation (NFF) National Scholar-Athlete and finalist for this year’s Campbell Trophy. Holtorf has been named a First Team Academic All-Big 12 performer the last three years, including 2019 when he was part of a school record 32 Wildcats on the Academic All-Big 12 teams, including a conference-record 26 first-team members.

The senior has started each of the last 37 games at center, including every game this season to help the Wildcats average 189.0 rushing yards per game to rank fourth in the Big 12, and third in the conference with 28 rushing touchdowns.