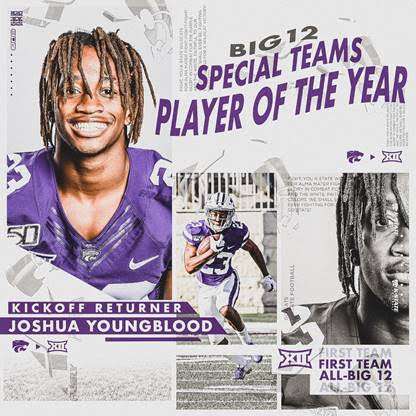 MANHATTAN, Kan. – With five Wildcats landing on the first or second teams – including Big 12 Special Teams Player of the Year Joshua Youngblood – a total of 15 Kansas State players picked up accolades from the Big 12 as the conference announced the coaches’ All-Big 12 football selections on Wednesday.

Youngblood, who was also the first-team kick returner, was joined by fullback Nick Lenners and defensive end Wyatt Hubert for top honors, while K-State’s second-team selections were offensive lineman Scott Frantz and punter Devin Anctil. Anctil earned his second-straight All-Big 12 accolade as he was an honorable mention pick last year, while the other four were honored for the first time in their careers.

A native of Tampa, Florida, Youngblood is the first freshman in Big 12 history to be named the Big 12 Player of the Year on offense, defense or special teams. It is the fifth time that a Wildcat earned the league’s top special teams honors since the award was established in 2005, joining Morgan Burns (2015, Tyler Lockett (2013 and 2014) and Brandon Banks (2009).

Youngblood finished the regular season with a nation-leading three kickoff-return touchdowns, a mark that ranks third in both Big 12 and school history and first among freshmen. His kickoff-return average of 38.1 yards leads the conference by 12.0 yards per return, while he would rank first nationally if he had two more attempts to meet the NCAA’s required minimum.

Hubert finished the year with 30 tackles, 12.5 tackles for loss and 7.0 sacks, the latter two categories ranking eighth and second in the Big 12, respectively. A product of Topeka, Kansas, Hubert carded a pair of two-sack games – at Oklahoma State and Texas Tech – while he had 2.0 TFLs on three occasions. A sophomore, he has 11.5 career sacks, which are tied for the second most by a Wildcat prior to his junior season.

Lenners, a native of Lincoln, Nebraska, has helped lead the way for a rushing attack that is averaging 189.0 yards per game to rank fourth in the Big 12. He finished the regular season with 13 catches for 163 yards, including a 21-yard touchdown reception against TCU. His catches were the most by a Wildcat fullback or tight end since Zach Trujillo had 19 in 2014, while his receiving yards are the most among those positions since Winston Dimel had 261 yards in 2015.

Frantz has started all 50 games at left tackle since the 2016 season opener, the most nationally among active Power 5 offensive linemen and tied for the third most among K-State offensive linemen since 1990. Anctil leads the Big 12 and ranks 16th nationally with a 46.0-yard average, a mark that currently ranks first in school history.

Finishing with eight regular-season wins for the first time since 2016, K-State will learn of its bowl destination and opponent this Sunday. Kansas State’s official bowl announcement will be made on Twitter (@KStateFB) and the official athletics website, www.kstatesports.com. Fans can preorder bowl tickets by visiting the K-State Bowl Information page by clicking here.