Republicans turn on novice whom they helped win Kansas seat 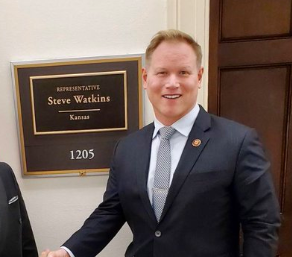 TOPEKA, Kan. (AP) — Republicans are going after one of their own in Kansas.

Some party members who helped a political novice squeak to victory in a 2018 race for an eastern Kansas seat in Congress have turned on him in favor of the state treasurer, roiling a district where President Donald Trump enjoys solid support and the incumbent has attacked the impeachment inquiry.

Defectors from freshman Rep. Steve Watkins’ camp include an ex-congressional aide who managed his 2018 general election campaign but is now a consultant for his opponent, State Treasurer Jake LaTurner. Other GOP activists jumped to LaTurner after former Republican Gov. Jeff Colyer publicly urged LaTurner to challenge Watkins in the Republican primary for the 2nd District in August 2020.

It's rare for members of a party establishment to rally support against an incumbent. Typically, those cases involve an incumbent in some legal or ethical mess or, in the case of Steve King in Iowa, a lawmaker whose comments on race have drawn rebuke from the party mainstream. Watkins, who has an orthodox Republican voting record, doesn't quite fit either category, but faces questions about his electability, even though the Democrats don’t have a candidate.

Watkins, a 43-year-old former Army officer and military contractor, still battles doubts about his fundraising acumen, questions about his lack of involvement with the GOP until his congressional run and allegations from the 2018 campaign that he exaggerated business and personal accomplishments. Earlier this fall, online rumors suggested he would resign.

“You always have to have your head on a pivot, basically waiting for the next shoe to drop,” said Pat Leopold, the LaTurner consultant who previously managed Watkins’ general-election campaign and worked for Kansas GOP Rep. Lynn Jenkins. “And they’re virtually all self-inflicted wounds.”

Democrats made an aggressive play for the seat in 2018 with a well-funded candidate, ex-legislative leader Paul Davis. But the only announced Democratic candidate for 2020 dropped out in October and the party is now encouraging Topeka’s mayor to run.

Watkins this fall dismissed the rumors that he would resign and has since thrown himself into defending Trump during the impeachment inquiry.

“He is not wasting any time worrying about Jake LaTurner,” campaign spokesman Bryan Piligra said in an email.

LaTurner, 31, was a staffer for Jenkins, who held the 2nd Congressional District seat for 10 years before forgoing a re-election campaign in 2018.

He won a Kansas Senate seat in 2012 and has been state treasurer since April 2017. He launched a campaign for the state’s open U.S. Senate seat in January before dropping out in September to run for the House.

As LaTurner has campaigned in recent weeks, Watkins has tweeted videos criticizing the impeachment inquiry. Watkins joined other GOP lawmakers in storming a closed committee session in October and, like other Kansas Republicans in Congress, he recently was named an honorary co-chairman of Trump’s re-election campaign.

Some Republicans are scratching their heads over the primary challenge. Becky Johnson, first vice president of the National Federation of Republican Women, said Watkins is a “good conservative,” adding that she hates to see a primary “when you’ve got a good incumbent.”

“I just don’t understand the need for anybody to run against him,” said Johnson, a retired independent oil company operator from Parker, a small town about 50 miles southwest of Kansas City.

He won a crowded 2018 primary with less than 27% of the vote, then the general election against Davis by less than 1 percentage point.

For some Republicans, that was far too close for a district the GOP has held for 22 of the past 24 years and that Trump won by nearly 27 percentage points in 2016.

Watkins also prevailed in the primary after his father, a Topeka physician, put nearly $762,000 into a political action committee whose only beneficiary was his son.

“The story of how all this happened is informative as to why people have an issue today — when the vote gets split like that,” LaTurner said during an interview. “People really have a sense that he bought the seat.”

Watkins made a point during his first 10 months in office of having town halls in each of the district’s 25 counties. Yet some Republicans said he still hasn’t built a deep following.

Lorie Johnson, a demolition contractor who is GOP chairwoman in Cherokee County in the state’s southeast corner, said that Watkins’ voting record is “OK so far.”

But she added, “I still have great reservations just because I don’t know anything about him.”