K-State returns home following a 30-27 win at Texas Tech for the final regular-season game of the year as the Wildcats host No. 22 Iowa State on Senior Night. The game, which kicks at 6 p.m., will air on FS1 with Brian Custer (play-by-play) and Robert Smith (analyst) on the call. The contest can be heard across the 39-station K-State Sports Network with Wyatt Thompson (play-by-play), former K-State quarterback Stan Weber (analyst) and Matt Walters (sidelines) calling the action. The game can also be heard on SiriusXM (S: 98, X: 200, Internet: 954) in addition to the TuneIn app.

A LOOK AT K-STATE

• K-State is bowl-eligible under first-year head coach Chris Klieman and is looking to improve upon its bowl position and 7-4 record this weekend on Senior Night.

• K-State has rushed for 2,037 yards this year on 462 carries which includes 26 rushing touchdowns after tallying only 20 rushing scores a year ago.

• Thompson’s seven rushing scores against OU and KU were the most over a two-game stretch by a K-State quarterback since Collin Klein in 2012.

• Thompson – who has four career game-winning drives in the fourth quarter or later – has thrown for 2,134 yards and 12 touchdowns with four interceptions.

• Thompson also became the fourth signal caller in school history with 4,000 career passing yards and 1,000 career rushing yards, but the first to do so prior to his senior year.

• Receivers Dalton Schoen and Malik Knowles each have over 350 receiving yards and three touchdowns.

• The K-State defense enters the week ranked highly in many statistical categories, including third down defense (4th; 27.9%) and first downs allowed (25th; 195).

• K-State has given up just 10 passing TDs this season, which are tied for the sixth fewest nationally this year.

• The Cats have surrendered only 34 total third down conversions this season – tied for the fewest in the FBS – while they were the final team to allow a fourth-down conversion when they did so at Texas on November 9.

• The Wildcats possess a great kicker/punter duo as Blake Lynch ranks 10th nationally in field goal percentage (88.9%), while Devin Anctil ranks 16th in the nation with a 44.9-yard punting average.

• Freshman Joshua Youngblood has two kickoff-return touchdowns this season – a 98-yarder at Texas and a 100-yarder last week at Texas Tech, the latter earning him Big 12 Special Teams Player of the Week honors.

A LOOK AT IOWA STATE

• All four of Iowa State’s losses have been by seven points or less.

• Brock Purdy leads the offense with 3,575 passing yards and 26 touchdowns, while receivers Deshaunte Jones (70 catches) and La’Michael Pettway (48) along with tight end Charlie Kolar (47) are his favorite targets.

• On defense, Iowa State ranks 28th nationally against the run and is No. 50 in total defense.

• Marcel Spears leads the team with 80 tackles, while O’Rien Vance has a team-high 9.0 tackles for loss and 6.5 sacks.

• Lawrence White, who is second on the team with 77 tackles, has a team-high two interceptions. 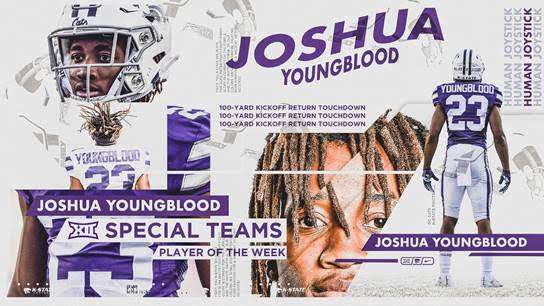 Youngblood is the only true freshman in the conference this year to earn offensive, defensive or special teams player of the week honors, while he is the first Wildcat to do so since Tyler Lockett picked up the special teams honor twice in 2011. K-State now has three player of the week accolades this season after safety Denzel Goolsby (defensive) and wide receiver/returner Malik Knowles (special teams) were honored following the Mississippi State games.

A product of Tampa, Florida, Youngblood returned a third-quarter kickoff for a score to push K-State’s lead to 10 over the Red Raiders in a game the Wildcats would go on to win, 30-27. It was Youngblood’s second kickoff-return touchdown this year (98 yards at Texas), which is tied for third in school history for a season and tied for fourth in a career.

Youngblood, who leads the Big 12 with a 35.9-yard kickoff-return average, is one of eight players in the nation to return two kickoffs for touchdowns this year, but the lone freshman to do so. Additionally, he is the first true freshman with two kickoff returns of at least 98 yards since USC’s Adorre’ Jackson also went 98 and 100 yards in 2014.

Kansas State will honor its seniors this Saturday in the regular-season finale against Iowa State inside Bill Snyder Family Stadium. The game kicks at 6 p.m., and will be shown on FS1.